In 1812, Sir Richard Colt Hoare (henceforth RCH) published "The Ancient History of Wiltshire, Vol. 1" - a magnificent work (one of a pair - volume 2 followed later) which detailed the work he sponsored and William Cunnington supervised in the years before and after the turn of the 19th century.
Aided by Stephen and John Parker, this ensemble excavated many hundreds of burial mounds across Wiltshire. It was one of the earliest attempts at scientific archaeological recording as opposed to simple treasure hunting. Many of the finds ultimately ended up in Wiltshire Museum and the descriptions of the barrows' excavations are a valuable resource.
There is a map in Ancient Wiltshire labelled "Stonehenge and its Environs", drawn by Philip Crocker, that depicts the landscape around the monument together with the barrows that had been investigated and numbered by RCH during this work. RCH also grouped the barrows into several areas in his "Stations" and "Itineraries" in the text, but not totally consistently in all cases. 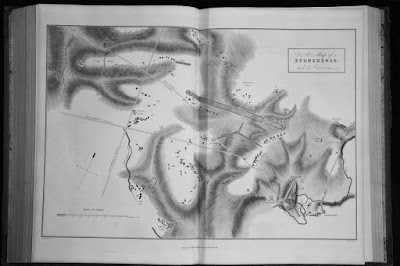 These days, we don't use RCH's barrow numbers.
Instead there are several different standards such as the Goddard/Grinsell Parish Numbers (eg Amesbury G15), the National Monuments Record Number (eg SU 14 SW 104), the Historic England Monument Number (eg 219732) or the Wiltshire & Swindon Historic Environment Record Number (eg MWI12998 SU14SW835).
All of the above refer to the same barrow - one called "Sun Barrow" - which is RCH's barrow number 164 in his Amesbury grouping.
It can be a real challenge to correlate information that uses one system with other information that uses a different system. What's more, there isn't (or wasn't) anything online that allowed you to find a barrow via any of these systems and see the reference numbers (and links to) the other systems alongside.
That sort of thing tends to frustrate someone like me so I created a Google Map backed by a Google Spreadsheet and set about matching up the data into a single reference work for the barrows shown on RCH's famous map.
It took about 6 months to achieve - two days to do the coding, the rest of the time going through each of the sources carefully matching records together. Unsurprisingly, there are some errors in each of the reference sources so I sent in reports of discrepancies along the way and the custodians of those sources have been able to update the information in them to fix things.
There are still inconsistencies - it's inevitable. In the time between RCH's excavation and numbering of a barrow and Goddard and Grinsell's work in the early and mid 20th century, mechanized ploughing has obliterated many previously upstanding earthworks. Since RCH didn't have GPS or even decent OS maps to go by, determining exactly which slight rise in the ground matches which particular one of his barrows can be a huge problem.
Nonetheless, the end result is useful I hope.

Hints and Tips for Searching

In the search box at the top of the left hand side of the map, you can type any keyword or reference number that might be relevant, so all of the following will find Sun Barrow:
Amesbury G15
SU 14 SW 104
219732
MWI12998
SU14SW835
Sun Barrow
The search isn't CaSe SeNsItIvE, but it does look for a match on exactly what you enter, so it won't find Sun Barrow if you enter Sun 219732, for instance.
You can also search for keywords that might be relevant to the finds from the barrow, so a search for "gold" will find all barrows where the information contains the word gold somewhere in the text.
You can also select by specific Grinsell/Goddard Parish or by RCH's Groupings using one or the other of the two drop down menus.
You can contact me using the email address hengemaster @ this domain.
Have fun!

P.S. In case you're wondering why the very obvious barrows on King Barrow Ridge and some others (eg Ambrosius's Barrow on Coneybury Hill) aren't given markers on the map, it's because Colt Hoare and Cunnington didn't investigate them for one reason or another. (Update: I've added the King Barrow Ridge barrows for completeness) 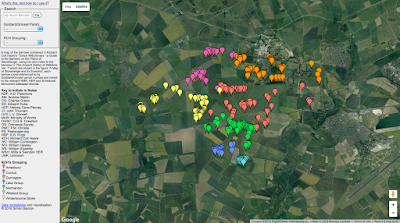