Labels: Lintel, Sarsen, Stone 156
Stone 156 is the lintel that once spanned the top of the tallest structure at Stonehenge. It now lies on its edge across the western end of the Altar Stone following the collapse of the Great Trilithon which comprised Stones 55, 56 and 156. 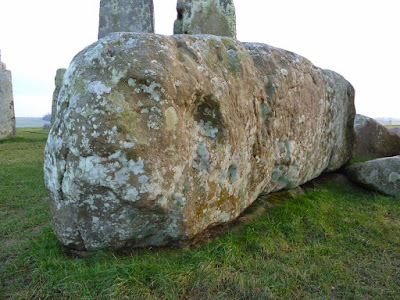 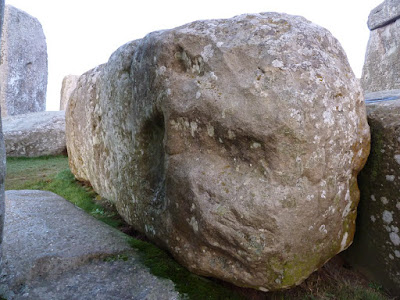 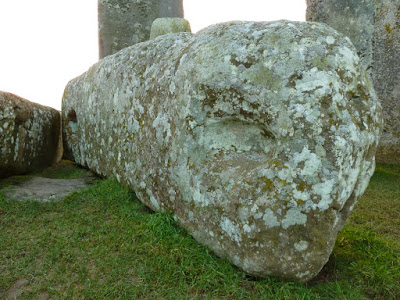 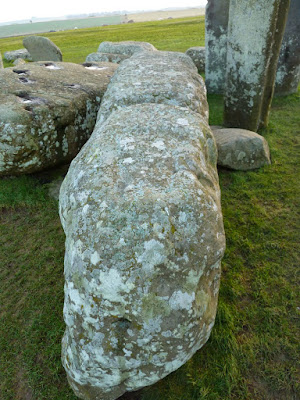 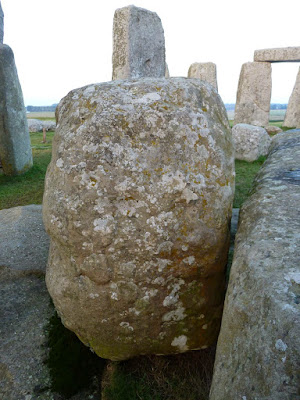 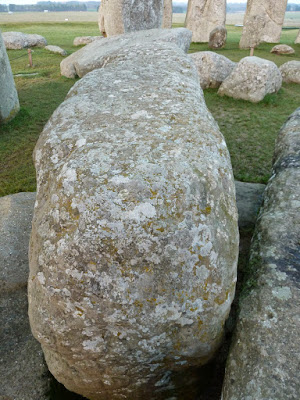 Deep mortise holes are visible on the eastern face of the stone, comparable in size to the large tenon that is on the top surface of Stone 56. 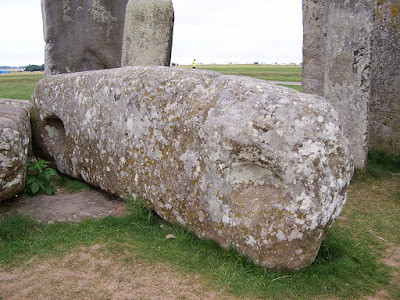 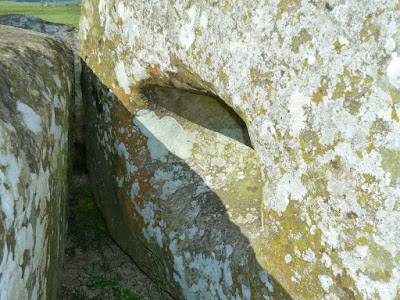 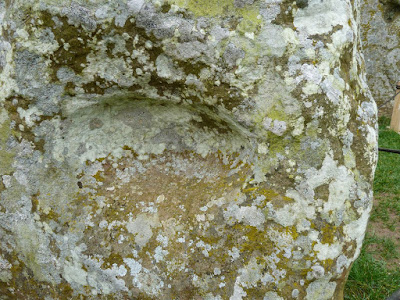 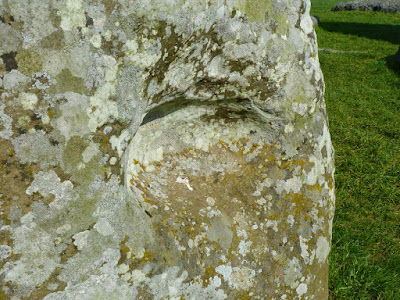 On the western face, shallower depressions are visible which appear to be the beginnings of mortise holes. It seems as though the mortises were begun on the wrong side of Stone 156 and the builders subsequently turned it over and made them on the opposite face instead. 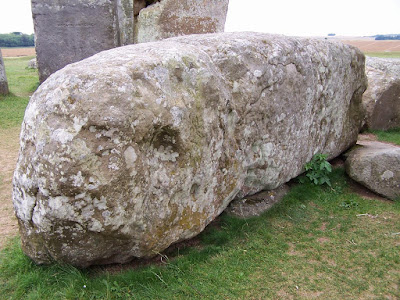 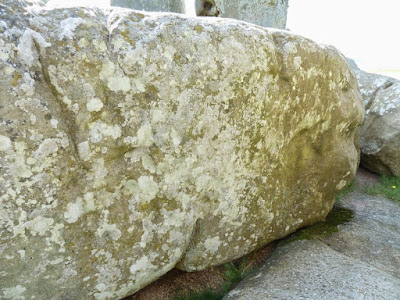 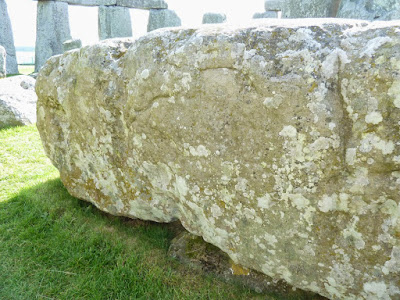 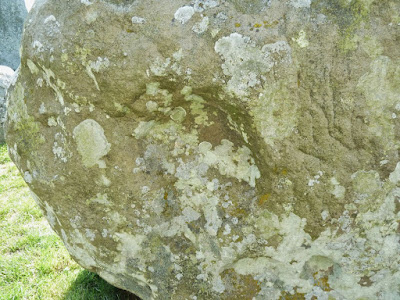 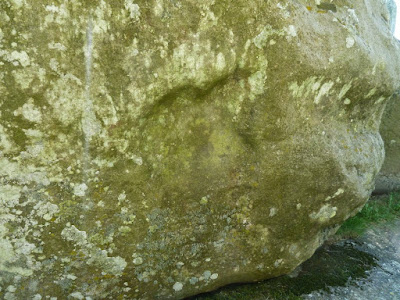 There is an enigmatic piece of graffiti carved into the middle of the eastern face, that is the face that would have been the underside of the lintel when it was in position in the Great Trilithon.

It's somewhat in the form of a question mark (?) with the letters LV in the upper left. 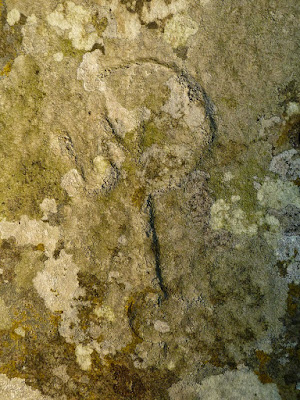 In about 1880, G.E. Robinson made a rubbing of this graffiti: 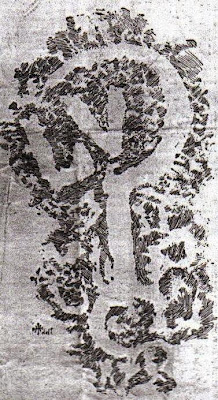 John Thurnam had published a short paper 16 years earlier, on Nov 24th 1864, about this carving entitled "On an Incised Marking on the Impost of the Great Trilithon at Stonehenge", where he discussed the evidence around its creation and subsequent discovery.

In the following week, a letter dated Amesbury, Sept 28th (ie in 1864) appeared in the Salisbury and Winchester Journal, with the offer of evidence as to the modern character of the markings. This was written by a resident of this small town, which is distant about two miles from Stonehenge. All real antiquaries must feel indebted to Mr W.C. Kemm, for his exertions in successfully dispelling a notion, which as he expressed it was "more likely to mislead than to throw any light on the origin of Stonehenge." Mr Kemm subsequently informed me, that in consequence of the discussion which had taken place (ie during the visit of the British Association to Stonehenge in Sept 1864), he had been induced to make inquiries of his neighbours respecting the markings on the stone. The first person who could give him any information he says was Mr John Zillwood, who is the schoolmaster of the place, a respected and intelligent person, 64 years old, well acquainted with Stonehenge from his boyhood. He says he distinctly remembers the time when he first saw the marks in question, when they were evidently fresh and newly made. His impression, when first spoken to, was that this happened about 45 years ago, in or about 1819. It was soon found that there was other evidence, in addition to that of the schoolmaster. John Pike, a shepherd, aged 62, whose early life was passed on the very farm of West Amesbury on which Stonehenge is situated, on being applied to, stated that he well remembered, about the time named by Mr Zillwood, seeing two men, as he approached it, walk away from Stonehenge where, when he arrived, he for the first time saw the marks, newly cut, as he believed, by the very men who had just left the spot. This evidence, circumstantial though it be, appeared conclusive enough. Direct testimony was however soon obtained in the person of an eye witness of the proceedings. Joseph Spreadbury, a hedger and ditcher on the same farm, of the age of about 45 years, remembers as a little boy being at Stonehenge, having been sent there with his father's breakfast or dinner, and actually seeing these marks cut in the stone, by a man who appeared to be a mechanic; he having a hand basket with him, from which he took the chisels with which he cut the marks; soon after doing which he walked off in the direction of Salisbury. He does not remember there being another man with him, but says he may have been joined by a companion soon after leaving the stones. Spreadbury's evidence shows that the marks were cut some years later than supposed by Mr Zillwood, the schoolmaster, and by Pike the shepherd, and probably not earlier than the year 1827 or 1828.

Apart from the graffiti Stone 156 is quite badly damaged as a result of visitors hammering souvenir fragments off it over the course of the last few hundred years.